It was with great sadness that we heard of the death of Robin Williams.  His work spanned movies that appealed to children, such as Happy Feet and Aladdin, through mostly serious works for adults such as Good Will Hunting which won him a well-deserved Oscar as supporting actor.  His IMDb entry lists an incredible 89 feature films and many more acting credits besides.  Here are a few of his many offerings at our store:
New to (or rediscovering) this actor? Try: 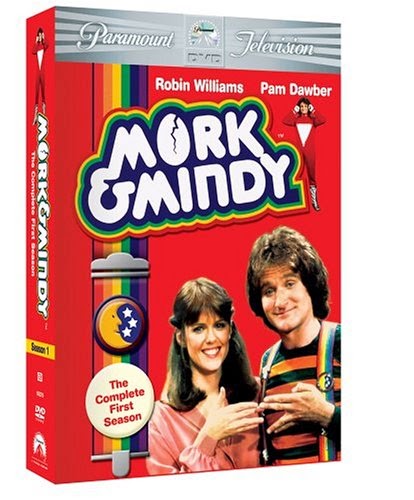 Mork and Mindy.   This TV series that launched in 1978 as a spin-off from season 5 of Happy Days was the perfect vehicle for Williams’ comic genius and launched his career.  Season 1 was generally considered the high point, and shows the manic stream-of-conscious humor that was Williams’ early trademark.
Hook – (PG, 1991).  Williams plays a middle-aged Peter Pan who has forgotten Neverland, both the good and the bad.  His joy at rediscovering play and imagination make this movie one that lingers in memory. IMDb page

Good Will Hunting – (R, 1997). As a psychologist, Williams helps an M.I.T. janitor with a genius for mathematics (played by Matt Damon) figure out what he wants of life, while battling his own challenges with the loss of his wife.  There is much less of the madcap comedy in this film, but Williams’ wit shines through.    IMDb page
Already a fan? Try:
Good Morning Vietnam – (R, 1997) “An unorthodox and irreverent DJ begins to shake up things when he is assigned to the US Armed Services Radio station in Vietnam.” – from IMDb.
Mrs.Doubtfire– (PG-13, 1993) After his marriage dissolves, a father dresses himself as a woman in order to spend time as a nanny to his own children.  Williams is both funny and warm, and Sally Field is wonderful as his ex-wife. IMDb page
Aladdin – (G, 1992) An animated Disney film, Aladdin tells a tried-and-true “princess” story with mostly stereotyped characters, but Williams steals the show as the big blue Genie. According to The Huffington Post’s  “5 Facts You Didn’t Know About Robin Williams,” Williams improvised much of the role.  He also voices the peddler who introduces the story. IMDb page

Jumani – (PG, 1995)  This live-action children’s adventure/fantasy follows two children who face the disasters released as they play a  magical board game.  Williams joins them in the real world after years spent in a jungle and has to learn to be a adult.  Also features Kirsten Dunst as one of the kids. IMDb page
There are many more of Robin Williams’ movies available in the store.  Search our inventory; tell us your favorites.
Posted in Reviews & Recommendations